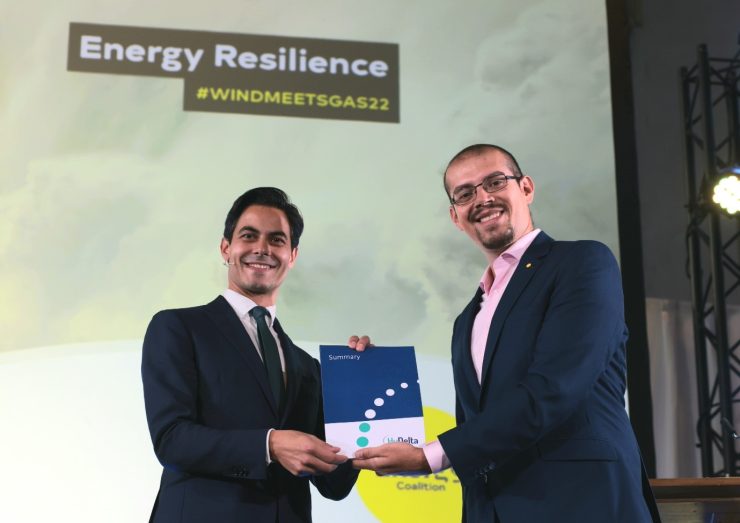 Slightly over 1 week ago, on the 6th and 7th of October, the 6th edition of the Wind Meets Gas 2022 conference took place. With over 400 attendees that received a personal invitation, it was a great event with distinguished guests such as the Dutch Minister of Climate and Energy Rob Jetten.

I had the pleasure of shaking his hand and giving him the summary of the results of the HyDelta 1 project. The HyDelta 1 project is the largest Dutch consortium that carries out research around the topic of hydrogen pipeline development. If you want to know more about HyDelta, I recommend reading the document I had the pleasure of showing to the minister, which you can find under https://hydelta.nl/research-programme.

Within Wind Meets Gas 2022, we had an excellent Parallel Session to discuss the status of the development of hydrogen transport infrastructures across Europe.

We had guests coming from the gas distribution system operators in France (GRDF) and Austria (ÖVGW), as well as from Pan-European research organizations such as ERIG and GERG.

During our session, we showcased the efforts each one of us are doing to generate knowledge in the area of hydrogen and discussed what are the next steps with each one of us.

The existing natural gas network is more ready to transport hydrogen than we originally thought, but we need to start talking and sharing more about hydrogen across the international community.

Several things came to light after our discussions both with the invited speakers and with the attendees to the event: over 100 people from the Dutch and the international industry attended the parallel session. I would like to share with you those insights:

People were initially conservative over the compatibility of the existing infrastructure to accommodate hydrogen given that hydrogen seems to be a significantly smaller and more explosive molecule than methane. We can still hear hydrogen skeptics talking about the smaller molecule size of hydrogen (that might render it significantly more prone to leaks) as well as about the lower ignition energy and the lower flammability limit (that might render it more prone to catch fire). Many bright minds set out to carry out modelling as well as experimental work to test whether or not the existing equipment designed for natural gas will be damaged or otherwise impeded from functioning normally when exposed to a hydrogen atmosphere.

Until now we have received a positive outlook to the hydrogen compatibility of the existing assets: yes, hydrogen is different from methane but it’s not THAT much different. We are already cautious enough when working with natural gas (e.g., by establishing safety factors, safety operating procedures, strict leak-tightness requirements, etc.), that the same caution that we are used to, can be applied to working with hydrogen. In short: we are cautious about natural gas, so when exercising the same level of caution (or even a higher one), handling hydrogen is not that different from natural gas.

In the end, the market will decide which route to take when unleashing the hydrogen economy

A few years ago, hydrogen blending was the talk of the hour, also because blending hydrogen seemed more feasible (and in turn cheaper) than 100% hydrogen transport. With the current developments (see my previous point), it is becoming clearer that it will not be that much more expensive to transport 100% hydrogen. This situation, coupled with the arms race towards who will give the most hydrogen subsidies (after the announcement of the US Inflation Reduction Act), has led to a more positive outlook when it comes to whether or not it will make sense to switch (part of) the natural gas offtakers to consume hydrogen instead.

Another point was mentioned regarding efficiency: it is always said that one of the greatest downsides of hydrogen is that the roundtrip efficiency (i.e., from electricity to hydrogen and back to electricity) is significantly lower for hydrogen than for batteries. This is a fact that I will not deny, but rather call your attention to the fact that ‘efficiency’ has never been a primary motivator for the market to adopt a technology. One of the main primary motivators for the market to adopt a new technology is price: can we make money off this? If efficiency ends up affecting price, then it will definitely play a role in deciding whether or not hydrogen is adopted by the market. The main issue is that there is not a natural relationship between efficiency and price mainly because price is affected by circumstances that often have little to do with the technology side: subsidies, availability of manufacturing capacity, availability of the resources, willingness to pay, etc. If storing energy via hydrogen has a total efficiency of 30% while costing €30/MWh, whereas storing energy via batteries has a 98% efficiency but it costs €90/MWh, then hydrogen has a substantial market edge that has no correlation to how efficient the roundtrip process is. In short, the market is the one that will decide what to adopt and when to adopt it.

This one comes from a fun fact: when listening to the presentation from the speakers, it became clear that in France, Austria, and the Netherlands we did the exact same research and, naturally, reached the exact same conclusions. We had a laugh when we found out and then we spent the rest of the session telling the story to whomever we came across. We invited people to Wind Meets Gas from the parts of Europe where we had little to no interaction with and thus, we had no idea what they were working on, only to find out that we are doing the same things.

I can imagine why there had been little communication so far: each of our organizations has different regions of interest (Northern Netherlands, Austria, France) and even the Pan-European organizations seem to have their own scopes independent from one another. I am glad to say that we made an agreement to intensify our communications and also invite others to partake, but this is something we should have started years ago.

It was an interesting event that helped strengthen the hydrogen community in the Netherlands and internationally as well. I look forward to next year’s event where (hopefully) we will have joined efforts to advance the large-scale adoption of hydrogen at European and international levels.