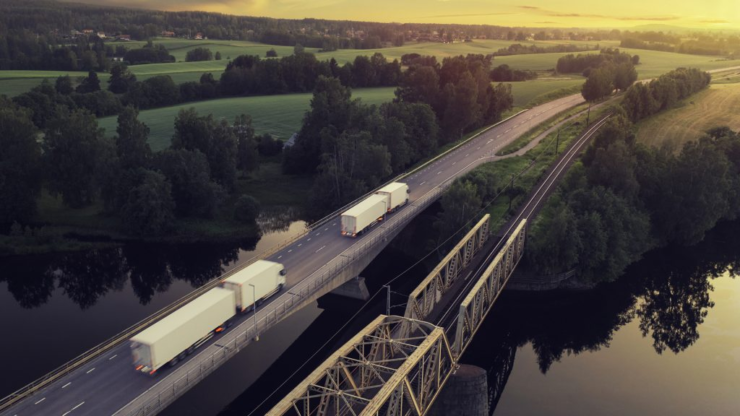 STRING has established the GREATER4H project to enable heavy-duty road transport to shift from diesel to hydrogen across the borders of Germany, Denmark, Sweden, and Norway and kickstart the hydrogen economy.

From 2025, the regions and cities in the STRING megaregion and the GREATER4H project partners, Hynion, Everfuel, and GP Joule, will make it possible to leave diesel trucks in the past, and accelerate the deployment of all kinds of hydrogen vehicles in Northern Europe.

Just as the famous causality dilemma of the chicken and the egg, the process of using green hydrogen as a means to decarbonise the transport sector has been at a standstill in Northern Europe, awaiting the outcome of the tug of war between the producers and the consumers.

The project is partly financed by the European Union, the private partners building the refuelling stations, and the cities and regions of STRING. The stations are projected to be ready for use in 2025.

Hydrogen-electric vehicles are propelled by a fuel cell engine, which transforms hydrogen gas into electricity. Refuelling a hydrogen vehicle is a non-event: it is as easy and fast as refuelling petrol or diesel, which is especially beneficial for professional transport operators, as it eliminates the logistical headaches of long recharging times for batteries.

Furthermore, raw materials like nickel, cobalt and lithium, which has been increasingly scrutinised for polluting areas around mining, are projected to be depleted long before the global demand for energy storage has been met.

Breaching the hydrogen market with long-distance heavy-duty road transport
Green hydrogen has a multitude of projected usages and a broad range of advantages as an energy carrier, both in transport and construction.

However, the market needs to develop sustainable business models, for green hydrogen to play its part in the green transition of modern society; with one of the entry points for market development being heavy-duty road transport.

The production of diesel trucks is a sundown industry, and when the environmental and climate costs of running a truck on diesel are internalised in the price for fuel, it will eliminate the demand for diesel trucks.

There is a need for a zero-emission alternative for heavy-duty road transport, as long transport by railway is unable to compete with road transport in Europe. In a new hydrogen strategy, the EU assesses that hydrogen produced from renewable energy sources is the best green fuel for trucks, as there is ample room for hydrogen tanks and fuel cells in large vehicles.

Several large truck producers, like Hyundai, Nikola, Toyota, and Volvo, are already investing heavily in the new technology. As an example, GREATER4H’s associated partner, Quantron Mechanics in Germany, has introduced several types of hydrogen vehicles, including heavy trucks able to load over 44 tons with a range of up to 1,500km.

For transport operators that are not able to invest in a new fleet of hydrogen vehicles, Quantron offers the option to refurbish old diesel trucks with hydrogen fuel cell technology, enabling a swift and seamless transition into a zero-emission future for professional road transport.

When cities and regions in STRING and their private partners establish the initial, currently lacking, infrastructure necessary to kick-start the hydrogen economy, the key players, such as green hydrogen producers and distributors, transport operators, energy intensive industries and hardware manufacturers finally get their awaited long-term investment signals.

By building the refuelling infrastructure and making hydrogen fuels available, GREATER4H will accelerate the development of sustainable business models around green hydrogen in general and open up for new uses in industry and transport.

This will, in time, fund necessary development in the full value chain, bringing down costs of hydrogen production and hardware. It will additionally provide incentive for funding research to reduce the energy loss connected to production and utilisation of hydrogen fuels, which is currently the Achilles’ heel of hydrogen as a key component in energy distribution.

The hydrogen society will be the biggest revolution of our energy supply since coal kicked off industrialisation. Hydrogen is both the simplest and most common element in the Universe, and is available in unlimited quantities. Its predictable availability contrasts to solar and wind energy, which are inherently unstable.

When the sun is shining and the wind is blowing, these energy sources are sufficient, but produce inadequate amounts on cloudy and windless days. By saving electricity in the form of hydrogen, or derived hydrogen-based green fuels, we can ensure a stable electricity supply without supplementing with energy from fossil fuels.

Heavier industries, such as cement factories, steelworks and glassworks, still depend upon high heat, which electricity cannot supply. By firing green hydrogen into gas turbines, the necessary temperatures can be reached, potentially making fossil fuels redundant as a fuel in some of these productions. In addition, today’s production of plastics, fertilisers and many industrial chemicals relies on oil products and natural gas.

Here, too, hydrogen production utilising new electrolysis methods can solve the problem, just as it will be able to give us green fuel for aviation and as a component in green fuels for sea transport.

The transport and construction sectors are, therefore, important areas where hydrogen can close the black holes in the current energy infrastructure.

GREATER4H as a best practice example for a European hydrogen economy

In December 2021, the EU Transport Commissioner Adina Valean, revealed a European strategy of deploying hydrogen refuelling stations every 150km on the TEN-T. She added that a refuelling station should be available on every urban node to create a sufficiently dense network of stations to kickstart the hydrogen economy, and let the commercial interests define how the rest of the hydrogen market will develop.

The EU expects 50% of its industries to be powered by hydrogen, along with having 60,000 hydrogen trucks transporting goods by 2030. The newly adopted European hydrogen strategy opens up to other ‘colours of hydrogen’, where colours refers to which energy source the hydrogen is extracted from.

This allows hydrogen plants to produce grey hydrogen for mobility and industry, at least until the demand is met from renewable energy sources. The GREATER4H project aims to exclusively utilise green hydrogen in order to deliver on the climate targets set by the EU and kickstart the hydrogen economy.

Looking ahead, we will see the hydrogen infrastructure planned in the STRING corridor further expand into Europe, as a result of the European Transport Commission’s binding plans to establish a similar network throughout the European Union.

The evidence of the movement’s momentum is mounting; the announcement of a European hydrogen bank of €3bn shortly after the GREATER4H project received funding from Connecting Europe Facility (CEF) being one of the latest testimonials.

Ursula von der Leyen, President of the European Commission, further underpinned the commitment in her state of the union speech on 14 September 2022, stating:

Clean hydrogen is the perfect means toward our goal of climate neutrality.

Von der Leyen also added that the commission prioritises independency from imported raw materials, and the use of hydrogen as an energy carrier and an alternative for lithium-ion batteries serves this purpose.