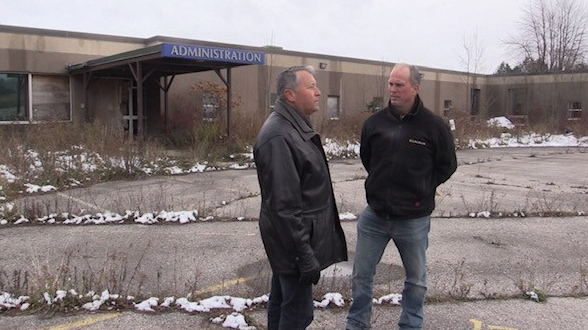 Former juvenile jail to be demolished to make way for hydrogen plant – Canada.

Jim Ginn is a happy mayor.

Jum Ginn, The mayor of the Municipality of Central Huron said:

We’ve finally landed the development that we’ve really been looking for. It’s going to make great use of this site.

Within the next couple weeks, demolition of the former Bluewater Juvenile Detention Centre will begin, to make way for a hydrogen production facility.

Our vision is to build this to be the biggest and best thing it can be, that ultimately would be an export facility for clean fuels and clean fertilizer.

Carlsun Energy has signed a letter of intent with Central Huron to make hydrogen on the site of the former Bluewater Centre, that has sat vacant since being closed in May of 2012.

“In this case, we’re talking about electrolytic hydrogen, so that’s taking clean electricity, in this case, off peak electricity form the grid to make hydrogen. That hydrogen can also be used to make ammonia, which is a fertilizer. It’s also a key ingredient for all nitrogen fertilizers,” says Van Geel.

While the hydrogen produced here may eventually end up powering cars and buses, it’s immediate goal would be to produce hydrogen for nitrogen fertilizer, to provide a more stable, locally produced fertilizer for area farmers, who saw fertilizer prices skyrocket this past year, because the majority of Canada’s fertilizer is produced in Russia.

“So, this is going to be great for farmers all over Southern Ontario,” says Ginn.

While the actual hydrogen facility is still years away from production, Central Huron, who bought the former Bluewater Centre last year to control future development, is excited to see their calculated gamble, pay off.

“We wanted something to spur economic activity, to get the development going, so it didn’t sit here for decades, unused. And bring some jobs back. We lost a lot of jobs when the Bluewater Centre closed,” says Ginn.

Demolition on the Bluewater Centre is expected to begin in a couple weeks, and take six to nine months to complete, says Ginn. Construction on Carlsun’s hydrogen facility wouldn’t likely begin until at least, early 2024. Van Geel says the plant could employ 50-100 workers once it’s operational, and will need another 3000 for construction and engineering.

Carlsun will only be leasing the 30 acres that once housed the juvenile jail, leaving another 270 acres for more development.

“There’s lots left. There will still be some agriculture land, and we’ll keep looking for more developments,” says Ginn.

Van Geel says the use of off-peak electricity from the grid is a key part of their plan, that will actually help the entire province.

“The more off peak electricity that’s consumed, it helps with affordability for all Ontario ratepayers,” he says.

Former juvenile jail to be demolished to make way for hydrogen plant, November 16, 2022